The cash purse in today’s competition scene is drastically different between men and women.

Though women are performing the same job as their male counterparts, hitting the water in the same conditions, they are only rewarded half as much for their efforts.

The famous Spanish windsurfer and now SUPer Iballa Moreno gives her arguments for equality in this interview.

On the other hand, Dave Kalama gives us a different point of view where it is not a matter of gender but rather the level of competition. 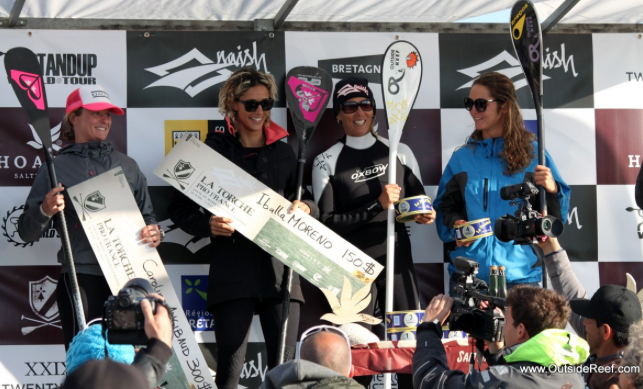 After studying computer science and applied mathematics for 5 years, I couldn’t resist to the call of my passion for water sports (windsurfing and SUP). I have worked for 3 months, made a little money, quit my job, found sponsors and started a pro athlete life.

On my first year, I sailed Peahi (Jaws), I won the US national of slalom windsurfing, finished 3rd at the France national championship in SUP race, and did many other good results in wavesailing on the American Windsurfing Tour.

Now I cannot make a living just with my sponsors, and even if I was finishing first at every competition, the prize money couldn’t cover all my expenses.

So I will have to work part time to be able to pay my bills, I won’t train as much as I want, and yes, my level in competition won’t be as good as it could be.

What if the sport would be rewarding women so they could have a career and make a living. Maybe there would be more women registering to events and a better level of competition?

So back in the 1970’s there was a law enacted called Title IX (9) which was designed to bring equality into collegiate sports. Fast forward 40 years and here is where we are at: Though women’s sports have yet to achieve parity 40 years after the law’s passage, there have been some remarkable gains. According to the Women’s Sports Foundation, approximately 300,000 young women played high school sports in the early 1970s but in 2011, that number had skyrocketed to just over three million. At the intercollegiate level nationwide, approximately 30,000 women played competitive sports, but today it’s close to 200,000, And finally, before Title IX, scholarships for women in sports were virtually unheard of. However, in 2012, close to 43% of all college athletes who receive scholarships are female. After decades of critics asserting that “females aren’t that interested in—let alone very good at—playing sports,” and that “no one would ever watch anyway,” every March, the NCAA women’s basketball Final Four breaks attendance and viewership records. Additionally, U.S. women routinely dominate in a variety of sports at the Olympic level. For example, during the 2012 summer Games in London, female athletes captured 66% of all gold medals won by the American team. Interest in U.S. women’s sports was unprecedented: 4.4 million watched the gold medal women’s soccer match between Japan and the United States, the most- watched event in the history of the newly launched NBC Sports Network. At the professional level, sports leagues such as the Women’s National Basketball Association (WNBA) provide career opportunities for highly gifted athletes beyond the college level.

In short, Title IX “built them a ball field” and they have come— and excelled—in overwhelming numbers. So show us the money !!