Downwind prone paddling is a bit like downwind standup paddling in that it’s not super fun at first. It’s a bit frustrating, and a tough workout.

Later, once you get some technique to ride open ocean bumps, both downwind prone and downwind SUP get quite addictive. I watched the videos when I first got my prone paddleboard, and this was really too much to digest at first. Now that I’ve got time on the water, it was super helpful to review these techniques.

Here’s a few tips I scoured from the net on prone paddling technique. For the full video, scroll down or click here: Part 1, Part 2.

Steering a Prone Paddleboard on Knees

Click on this video (1:57) for an awesome quick demonstration of how to pressure the opposite rail to turn. For example, to turn right, pressure the left side of the rail. Kai Lenny told me does this and it works somewhat like a sailboat keel in that pressuring the right puts the fin to the left side of the board, making the board turn left. Click this image to go right to the steering part. 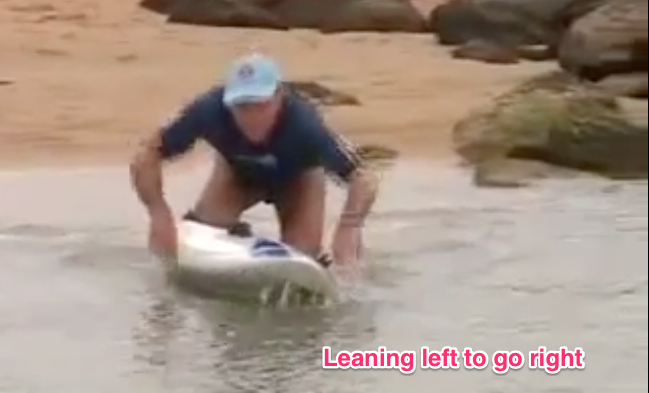 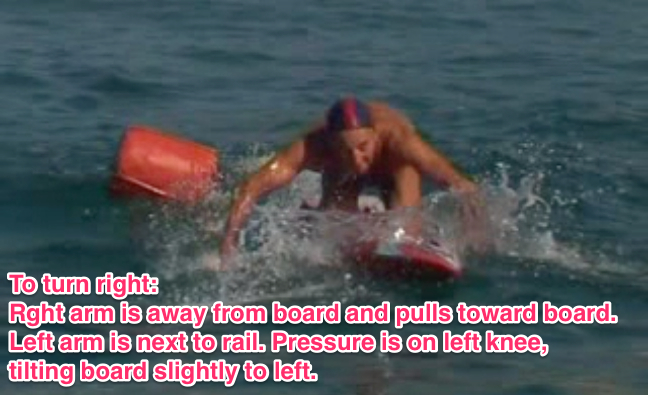 For a quicker turn, the arms go in the reverse direction to turn the board. 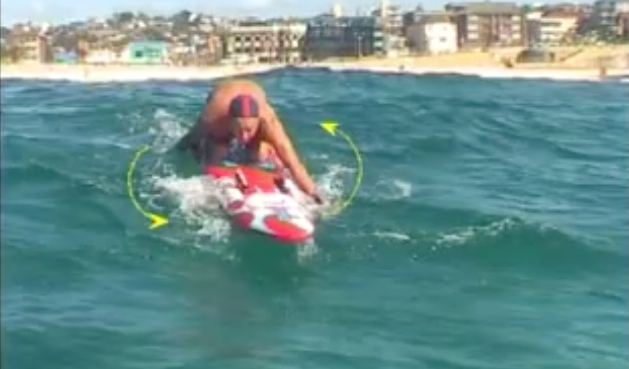 Back is straight. Upper leg is about a 45 degree angle. With the back straight, you should be as high as possible, without putting so much weight on toward front that you get off balance. Feet are normally kept flat, but they might be raised to get riding a swell or in paddling in flat water. Head and shoulders are not rails beyond horizontal, or parallel to the board.

Arms are extended to maximum reach at water level:

Arms are then bent to get a clean catch on the water: 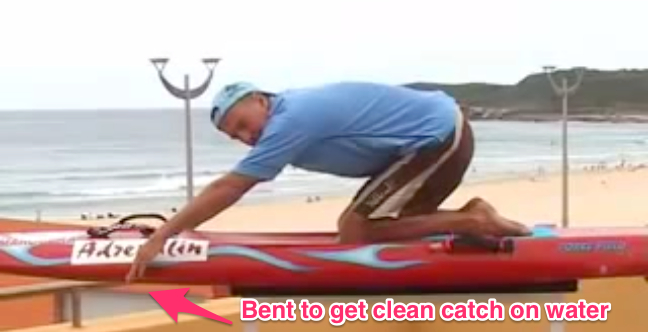 Throughout the stroke, the head looks forward over the board:

The weight of the head and shoulders is applied to the hands. The arms go as deep as possible into the water. The elbows go underwater, the chin almost touches the board, and the biceps touch the rail. In the first part of the pull, the angle between the arms and the trunk does not close up. When the arms get to maximum depth, that’s the most power of the pull. 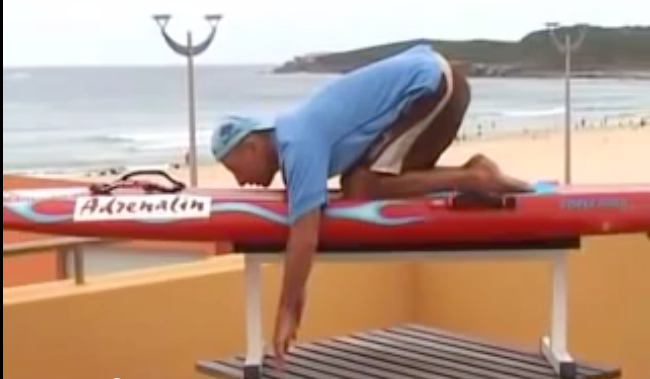 This is the least powerful part of the stroke. Keep the hands maintaining force on water, wrists pointed straight down, and moving to the back of the board. 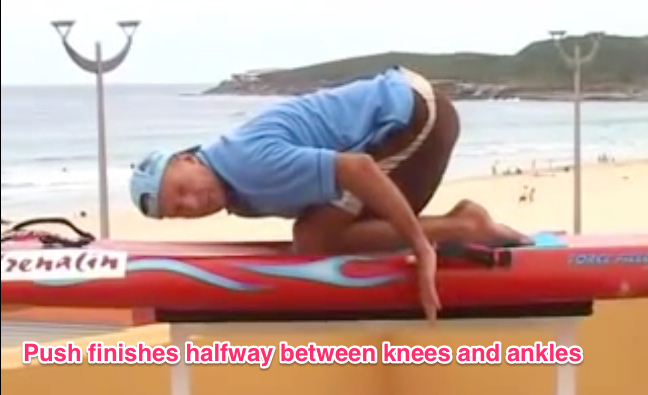 Release the hands from the water with the elbows 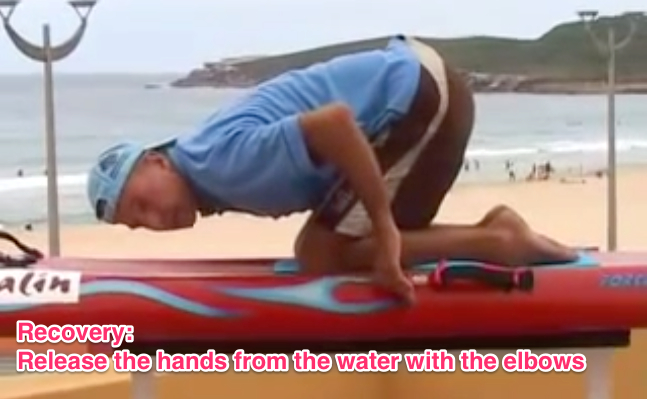 Bring hands forward inside elbows along the rails of the board. Relax as many muscles as possible. 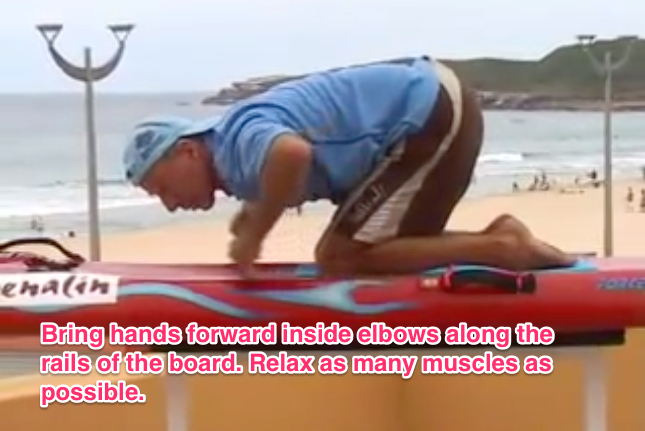 Opposite arm and leg work together. As the right arm pulls, the left leg kicks. 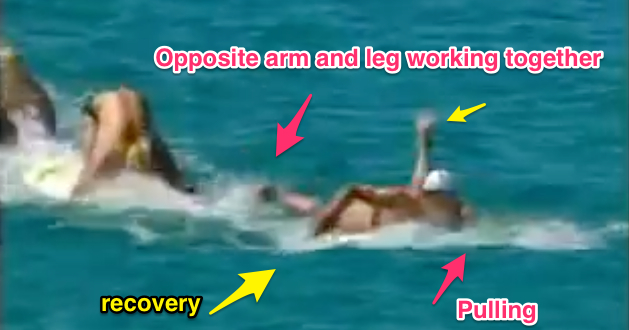 To help with balance, the legs are kicked outward and take a circular path.

The kick is not high and the legs are never raised more than 60 degrees.

Arms enter water at a steep angle and leave the water earlier than a swimming stroke. 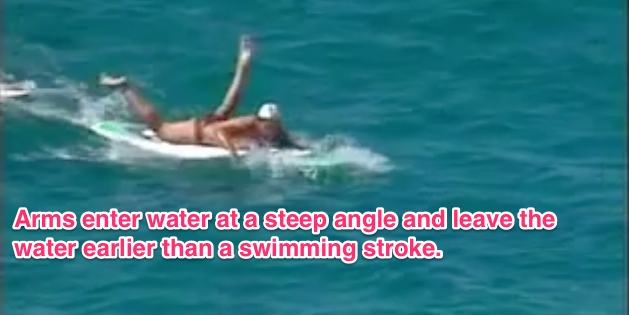 Paddler keeps head as low to the water as practical to get maximum stroke depth.

Feel the back of the board lift and paddle at 100% speed.

Move backside to highest possible position to tilt board to the angle of the front of the swell. 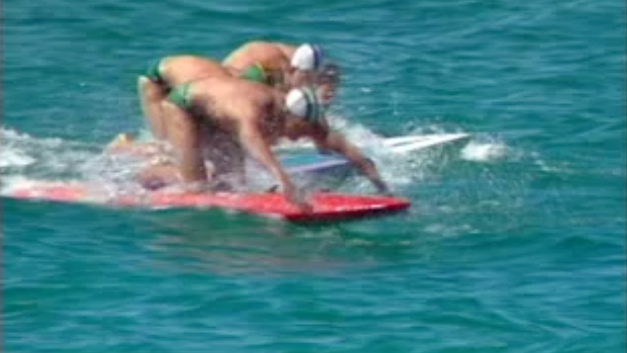 If riding waves in a kneeling position, keep hands in water and palms forward for balance. Finger tips will trail in the water. 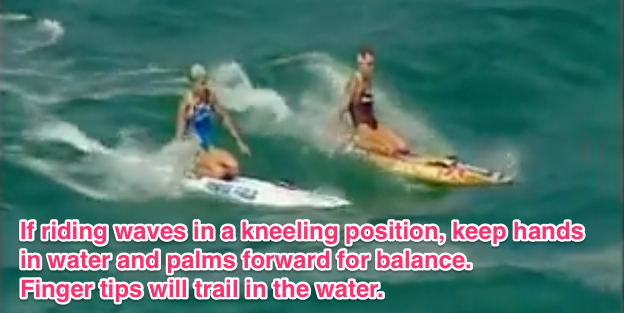 Here’s the full video, with my notes. You can also click the images below to go directly to the video explanation at the given time in the video.

Well Done! A few other advantages-
-While knee paddling in downwind conditions, the paddler has increased perspective of how the water comes together
-The butterfly stroke offers a blast of forward momentum to catch glides
-Once on the bump/runner the weight of the paddler is concentrated in the fastest part of the swell

It’s worth noting that when turning the board on one’s knees, and leaning the board to left to turn right, that the shoulders are facing right, and the body is over the right side of the board, allowing one to counterbalance the pressure on the left knee.

Inflatable Boards come in different sizes and shapes and for various purposes. It will be best to define your purpose for standup paddle boarding and and also the area you living in. If you are completely new to this wonderful sport, its highly advisable to go for all round inflatable stand up paddle boards. To train your technic and legs you are in a big need to use mini steppers like this one you see here. Just 2 weeks of training with this staff and you will become a pro.